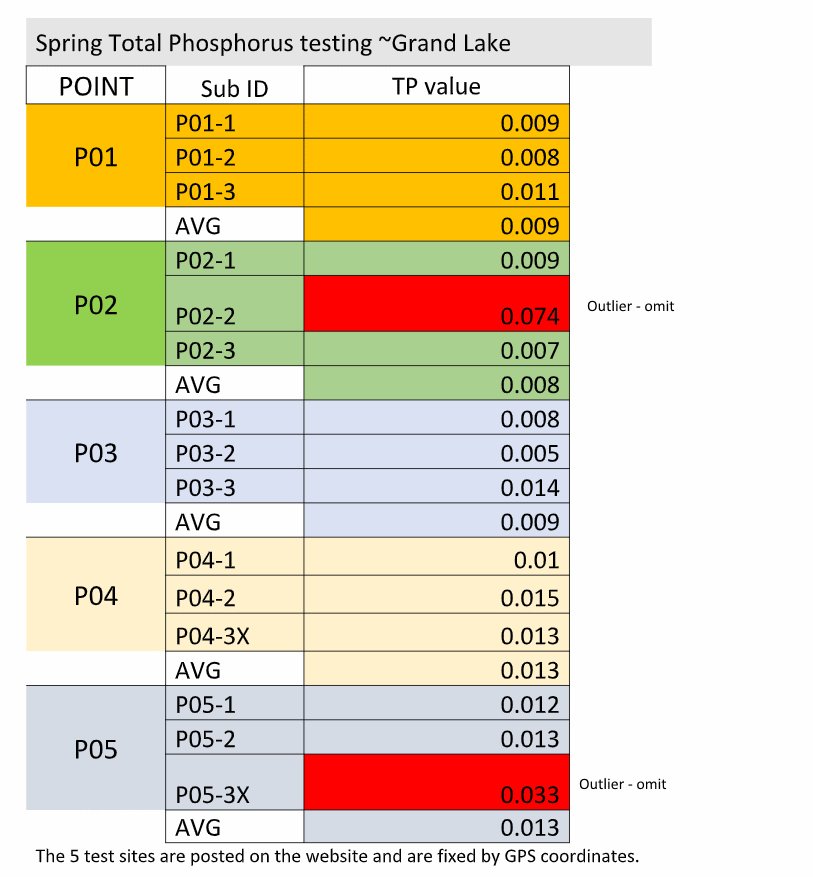 Phosphorous ~ while the results indicate an notable increase over last year, a review of past results does show that there have been previous peaks of equivalent magnitude. But behind occasional spikes, the 20 years of data which we have shows a clear upward trend over this timespan, which should be the focus and concern of us all.

Last year’s numbers show a down-spike, which could have been attributable to a few factors, including: 1)  due to COVID restrictions the spring testing was done later than usual….i.e. further from the target of “as-close-to-ice-out as possible.” 2) less boat traffic at that point, for the same reasons.

Milfoil ~ Still of great concern is the constantly increasing spread of European milfoil. This is an invasive species which is difficult to control, but which is frequently assisted by careless human activity, most commonly, boat traffic through milfoil patches. This results in quantities of milfoil “cuttings” which are capable of drifting with currents, settling to the bottom in a new site, rooting, and spreading further in this new location.

Mitigation of milfoil is a responsibility that we all must share.

The Municipality of Val-des-Monts has undertaken a centralization of water testing in our lakes.

The Coles Notes version is that they have hired a staff biologist who has developed a cadre of volunteers on most of the lakes who will perform an enhanced program of water testing.

Among the advantages of this approach are:

3) professional guidance and an increased scope of testing.

This program has great potential, and we are optimistic that the implementation will be successful.

The way forward (substantially the same content for the past 3 years of newsletters…. but still valid!)

The direct link between human activities on a lake and phosphate increase/water clarity decrease is irrefutable.  Short of Draconian measures, which would be totally unrealistic and unsupportable, there is really no action that will halt or reverse the gradual degradation of the lake without complete buy-in and cooperation of all lake residents.  Simply, water quality and environmental stewardship is and will be the responsibility of all of us.

The three most significant contributors to this degradation are shoreline erosion, chemical runoff, and careless operation of boats.

The three most effective countermeasures to which we can all contribute are:

The first 10 feet of lake bottom supports almost 90% of the aquatic life in the lake. It is not rocket science to extrapolate the importance of protecting that buffer zone.

If you are within 100 feet of shore, you should be travelling dead-slow, and producing no wake.

Try to avoid patches of weed. There is more than likely milfoil within the patch and if it is cut

loose, will continue its invasion of the lake.

Specialty shops now cater to this market niche. In most cases, the cost is comparable to “less-green” items.

In conversation with the president of a Muskoka area lake association, she described a great result that they achieved by a concerted effort to convince cottagers to use 100% non-phosphate dishwasher detergents.

Most supermarkets have products of this type; it is an easy switch and most users found that the performance was as good or better than the phosphate-containing types.

Water Quality
The ice went out of the lake in Spring 2020, in late April.
Due to the restrictions caused by the pandemic we were unable to perform the normal ice-out testing until May 19th.

Three samples were taken at each location and the test results for Total phosphorous were averaged.

May 29th, we completed the testing in Green Lake, taking samples at two sites.

Total Phosphorous ~ Grand Lake – while the results appear to indicate a decrease over last year, a review
of past results does show that there have been previous peaks and valleys of equivalent magnitude. But
behind occasional spikes and dips, the 20 years of data which we have indicates an upward long-term trend,
which should be the focus and concern of us all.

Green Lake – Our testing history on Green Lake has been erratic and the data is not sufficient to make any
meaningful assessment. We shall try to match Grand Lake testing frequency, but the logistics of accessing
Green Lake will require that we acquire sufficient volunteer assistance from interested Green Lake
residents.

Water clarity ~ While long-time residents often discuss the decrease in water clarity over many decades,
the Secchi Disk results have continued to be consistent with the classification OLIGOTROPHIC: “clear
water with very low levels of phosphates, algae, and nutrients.” 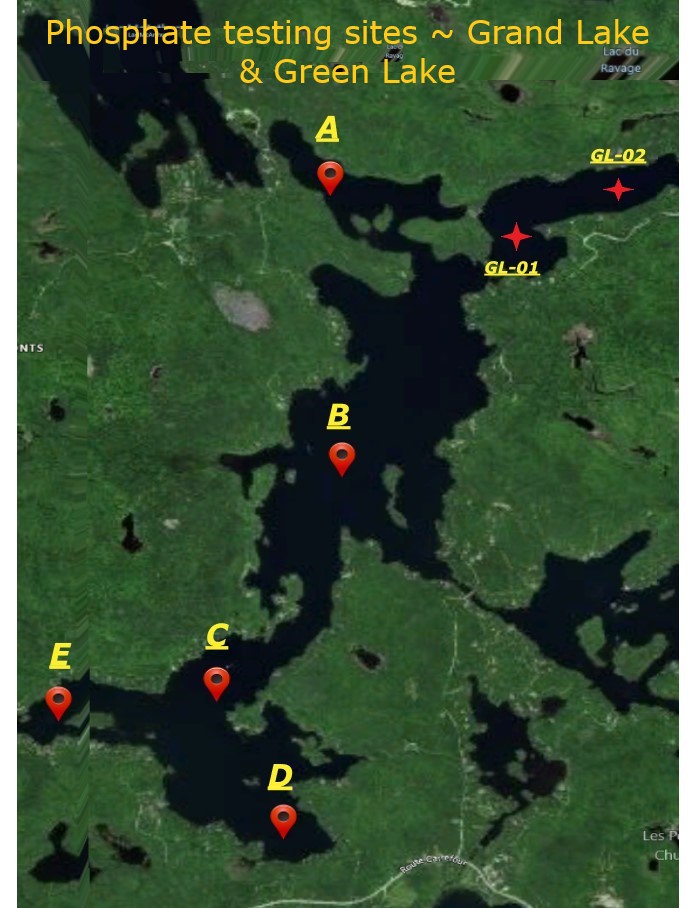 The ice went out of the lake, Spring 2019, between May 1-2. Three water samples were taken at each of the five test sites on May 19th; the test results were averaged.